With this bird watching safari we have combined three separate circuits into one elaborate & comprehensive itinerary. However, for those birding fanatics reading this, each can be tailored as a separate itinerary;

Murchison Falls national park with over 360 birds and famous for the shoebill, giant kingfisher, bee eaters and other species.

Even richer than Uganda's Bwindi in local specialties, here look out for Red-collared Mountain Babbler, Ruwenzori Turaco, Stuhlman’s Double-collared Sunbird, the exquisite Purple-breasted Sunbird, Neumann’s Short-tailed Warbler and Kungwe Apalis, and can catch up with just about any of specialities.You may be lucky to encounter Shelley’s Crimsonwing or Albertine Owlet, two species only a handful of birders have seen before.

In Tanzania enjoy bird paradise over national parks and reserves to the densely wooded slopes of Mount Meru in the shadow of the much larger Mount Kilimanjaro. Wander among the giant baobab trees of Tarangire National Park before visiting two of the world’s most famous wildlife locations— Ngoro-ngoro Crater and the vast Serengeti. Tanzania is a a place of wonder,  where mammals big and small can follow unmolested lives and where birds of every hue seem to queue right along the wayside.

©LIST OF BIRDS THAT YOU CAN SEE ON THIS BIRD SAFARI

1. Adjust length of stay, we recommend between 5-15 days

2. Choose from ANY camp/lodge/resort in East Africa!

6. Bushtrek Safaris is a registered IATA accredited agency.
We can book you ANY flight from ANYWHERE!

Conservation is at the forefront when planning your itinerary. We aim to keep transfers from one to location to the next, short & comfortable, with carbon footprint as small as possible

A once-in-a-lifetime safari, a father heaven for any birder out there

Arrive in Entebe, where your bird watching guide starts you off at the Viagra Botanical garden. Birds List (ABOVE): pelicans-ostrich-drug parrots-crowned cranes-weaver birds (orange)-black necked baglafect-northern masked weaver-shoe bill storks ..just to name a few. Dinner and over night at the Forest Cottages in Ntinda

After an early breakfast set off for Lake Mburo National Park with a brief stop at the Equator. Birding to the park begins as you turn off to Nshara gate.  Birds List (ABOVE); Lunch break at Rwonyo. A short boat ride may yield sightings of: gonolek-king fishers-herons-elusive shoebill. Over night Luxury Tented Camp

After breakfast embark on an early morning nature walk.  Birds List (ABOVE) Stop for lunch in Mbarara area. Drive through the unique western rift valley escarpment, try spot over 600 bird species recorded. Queen Elizabeth National Park is one of the richest and best managed parks in Africa. Dinner and over night Mweya Safari Lodge / Ecology Hostel.

After breakfast connect to your flight to Rwanda via Kampala for yet another bird paradise. Arrive in Kigali and drive to Nyungwe National Park heading south towards Butare, road that passes through Nyungwe National Park. You will be at Gisakura on the western, lower edge of the reserve. Dinner and overnight on full board basis.

Leaving early after breakfast make your first stop at the “Lark Plains,” a strange open area situated between Arusha and the border town of Namanga to view one of Africa’s rarest birds, Beesley’s Lark. These plains, in the rain shadow of Mount Meru and Mount Kilimanjaro, are perfect habitat for larks. Onwards to Tarangire

After breakfast explore the bird-rich habitat and you may see the Maasai Ostrich, White-headed, Rüppell’s,  Birds List (ABOVE): Habitat for the handsome Bateleur Eagle & numerous Tawny Eagles. Overnight in Tarangire National Park

After breakfast explore The Ngorongoro Crater and experience it for yourself. Drive down into what was once, many eons ago, the fiery heart of a huge volcano. Today this natural amphitheater has a much more peaceful atmosphere as Wildebeest, Coke’s Hartebeest, Grant’s and Thomson’s Gazelles, and Common Zebra feed contentedly, or at least as contentedly as the ever-present Lions and Cheetahs will allow, although the Black Rhinoceros here will be less concerned about these predators.

Depart Ngorongoro early enough after breakfast and  drive west to the very edge of the vast Serengeti National Park and the area around Lakes Ndutu and Masek. Here the mammals are constantly on the move, and intercept the large herds of Wildebeest and Common Zebra

After breakfast watch the birds close to the lodge and then proceed westward across the southern part of the Serengeti to Mbalageti, in the western arm of this huge national park

After breakfast watch the birds close to the lodge and then proceed westward across the southern part of the Serengeti to Mbalageti, in the western arm of this huge national park

After breakfast head towards or the seclusion of Speke Bay Lodge for a one-night stay, traveling along the Grumeti River, and stop to look for giant Nile Crocodiles

Short journey to Mwanza for a local flight back to Arusha, and connect to your flight to Nairobi where the tour continues birding in the area best known for bird watching. Drive to Maasai Mara, check in at Lodge, evening game drive for birds such as various species of larks, eagles, vultures, waders and numerous game seen at close quarters. Breakfast, Lunch, Dinner. Overnight at the Lodge

After breakfast depart to Naivasha past Lake Bogoria for flamingoes and the geysers. You will see the brids such as Southern Ground Hornbill and passing by Kinangop plains looking for Sharpe's Longclaw, Malachite Sunbird, White-winged and Long-tailed Widowbird. Overnight at the lodge. 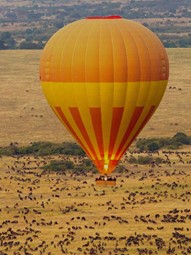 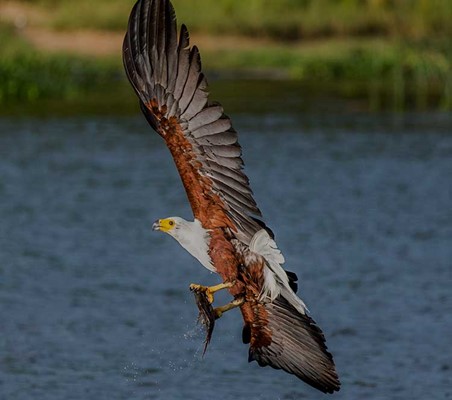 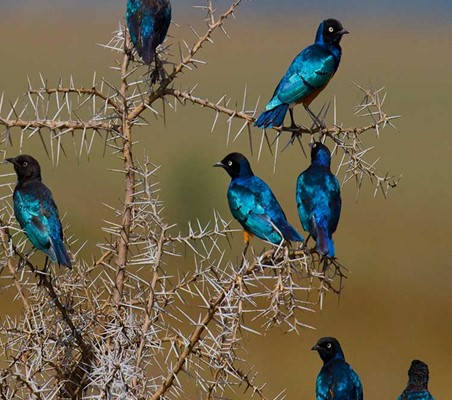 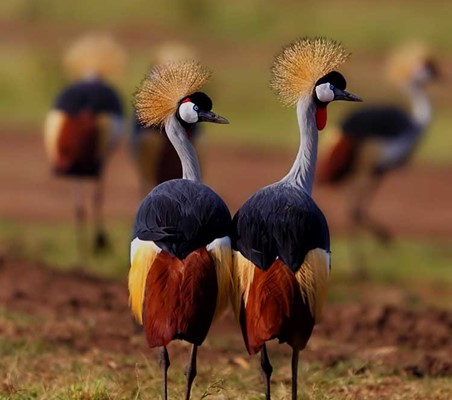 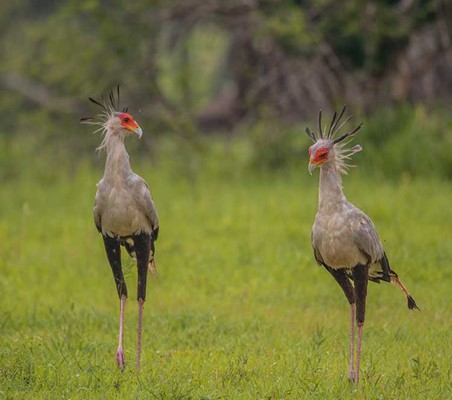 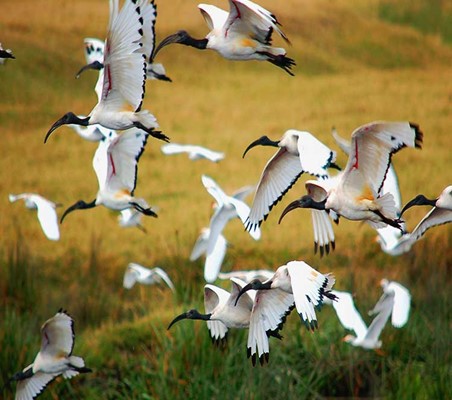 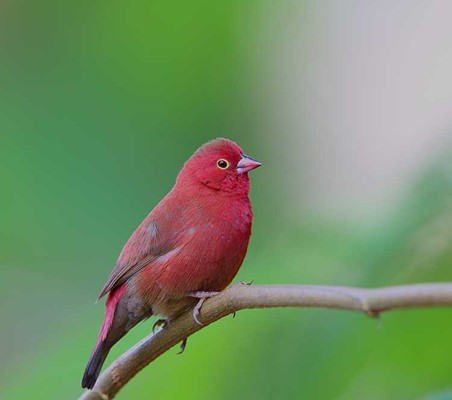 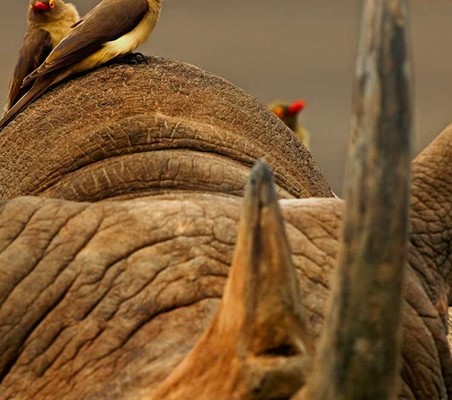 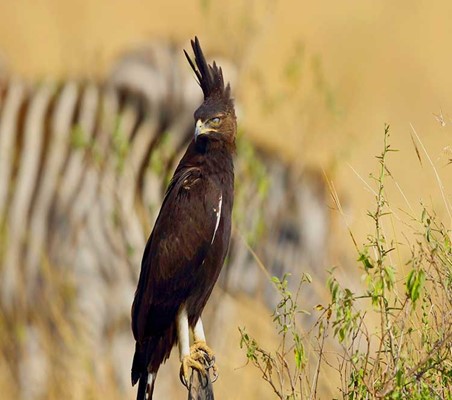 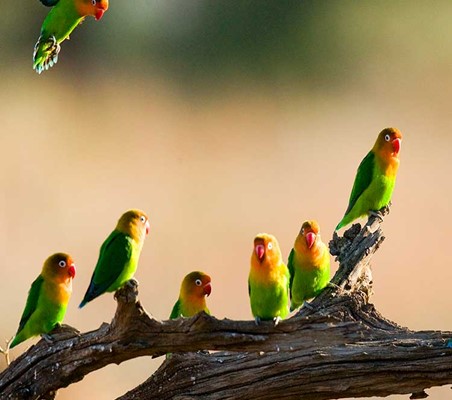